Okay, this time I'm going to show you how to make your own ten LED flasher circuit. Basically the LEDS flash one after the other, like xmas chase lights. You can use more then ten LEDS, but you'll only be able to have ten sets of them (with this circuit).

First off, you'll need the following components (total parts cost of about $15-20AUD):

Here's the circuit diagram to use for the circuit. It looks like a PCB layout plan because it is, but it gets the information across :) 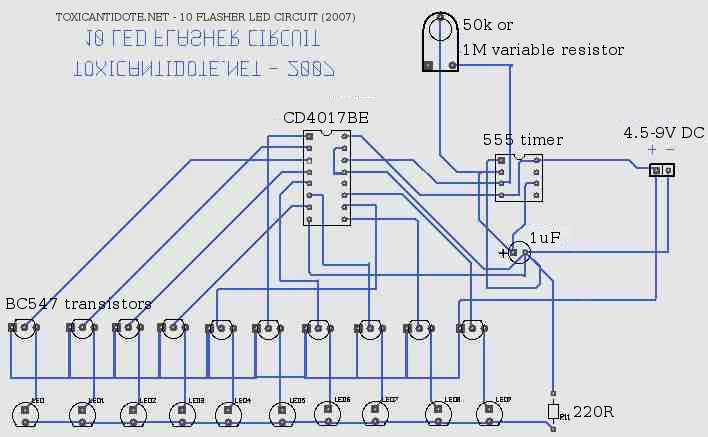 The CD4017BE IC will count up through its outputs when its clock input is pulsed, so we use the 555 timer IC to send that pulse. Now, the CD4017BE IC self resets, so we don't have to worry about that. That does raise the point though, that if you want less LEDs, you can simply wire the CD4017BE output after your last LED to the ICs reset input (pin 15).

Now, I've shoved a bunch of transistors in between each output and its LED, this is because I found the LEDs in my prototype did not glow paticuarly bright due to a loss of voltage in the CD4017BE IC. It's probably because the CD4017BE chips weren't meant to directly power other stuff. Having transistors to get the LED supply voltage straight from the main supply also allows for easy expansion to more powerful lights (requiring another power source). Simply wire the collector pin of all of the transistors to the positive supply of the second power source, place your higher powered light where the LED would go, and wire the secondary power source's negative terminal to the negative terminal of each light.

The timing of the 555 timer IC is controlled by the values of the variable resistor, and of the capacitor. Now, as I'd expect you to know, 1 Hertz = 1 cycle per second. We can work out the frequency (cycles per second) of the 555 timer using the equation T=1.44/(2RC) where T is the frequency in Hertz, R is the resistance (of the variable resistor) in MΩ and C is the capacitance of the capacitor in µF. Now, the frequencies in the parts list aren't calculated, I measured them (between positive, and pin 3 of 555 timer).

I've got a picture of the circuit assembled on a breadboard for you, although most of the components are hidden from view by wires: 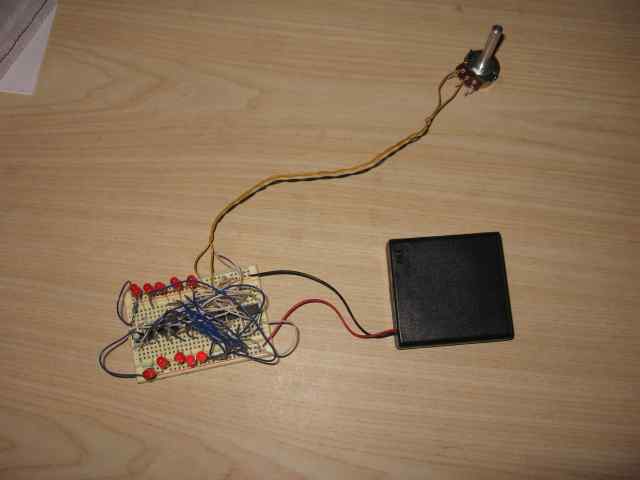 I've also got a little movie of it in action. Please note that only one LED is ever on at a time, the camera just can't keep up if its flashing too fast. View movie (4.4MB)

So, there you have it, your very own 10 LED flasher circuit. How you choose to use it is up to you, I made mine because a friend wanted some flashing lights in a display, and wouldn't settle for just two flashing LEDs.

It has been many years since I first built this project, and there's a bit of a flaw with it. The BC547 NPN transistors are being ysed as high side switches, which may result in excessive current through some of the components. Ideally you want to use low-side switching with NPN transistors instead. Sparkfun has a decent tutorial on using transistors as switches, and goes in to much more detail.